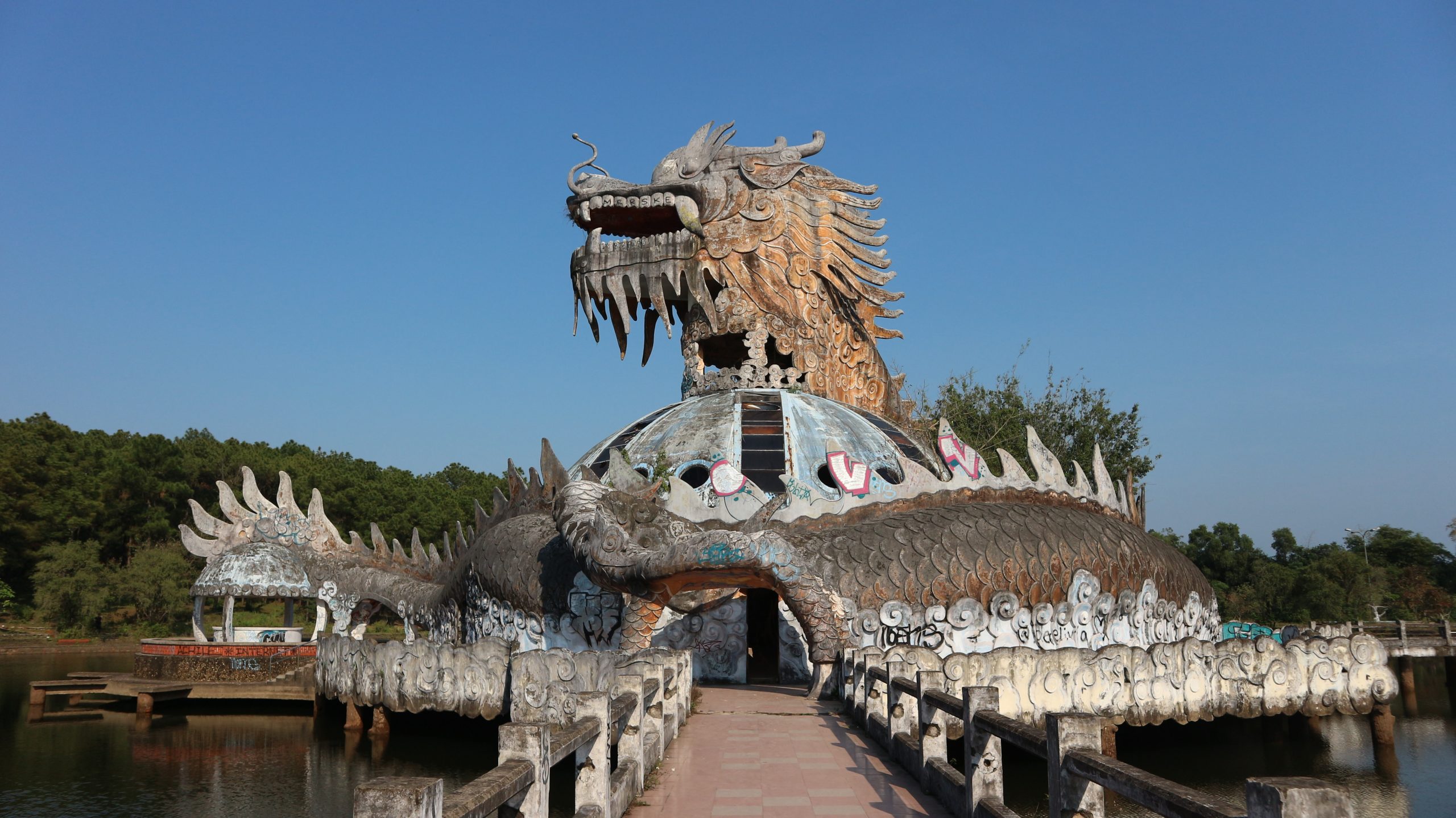 Hue is sometimes sadly missed by travellers touring Vietnam. We take you on our experiences of Hue, from visiting the ancient Imperial City to an abandoned water park. Hue is a must-do!

Is Hue Worth Visiting?

When we were planning for Vietnam, Hue was one of those areas where we were really in two minds about visiting. We love history, so the ancient, Imperial City appealed. Whilst travelling through Northern Vietnam we were surprised at just how many travellers were missing out Hue. Travellers were opting to go straight to Hoi An. We discussed skipping Hue but we eventually decided to visit for 2 nights and 3 days, and boy, we’re glad we did!

Located on the wide Perfume River, Hue is a city in Central Vietnam. The ancient city was Vietnam’s capital from 1738 to 1775 and from 1802 to 1945. The walled enclosure of the ancient city contains stunning monuments and buildings such as a Citadel, Pleasure Garden, Hall of Supreme Harmony and much more.

The weather in Hanoi was quite mild and damp, as soon as we arrived at Hue the heat hit us. We were enjoying clear skies, sunshine and temperatures around 27 degrees in February.

By night we expected Hue to be a quiet city, not much nightlife, how wrong we were! The small centre of nightlife was situated around the area of Chu Van An where there are a whole host of bars and restaurants.

How to get to Hue?

From the Airport we hailed a taxi outside who took us to our hotel for around £5.

Where to eat and drink in Hue?

Wow, Wow, Wow. This is the most amazing place, not just in Hue, not just in Vietnam, but the world. The Vinpearl Hotel in Central Hue towers above the city and you can see it for miles around. The 38 floors of the Vinpearl give it a total height of 160 metres, making it just the 46th highest building in Vietnam. In Hue it looks giant, it can be seen from miles around!

So, what is so special about a hotel in Hue? What is on the 37th and 38th floor simply amazed us.

It’s not well advertised, we found it totally by chance. The rooftop bar at the Vinpearl was one of the highlights of our holiday. We spotted the Vinpearl building whilst wandering Hue, we didn’t know anything about it but we thought we’d take the short ten minute walk to see what is in there. Once we got to reception we asked if they had a rooftop bar and they did!

Take the elevator up to the 38th floor, on the exit from the lift you are instantly blown away by the view, you can see for miles around. We went up for sunset and the view of the sun setting behind the imperial city was such an unforgettable experience. The drinks here were great value for money. Sure, it’s more expensive than other bars, but for the views, it’s worth it. You’ll pay around £5 maximum for a cocktail and £2 for a beer.

Situated on Phạm Ngũ Lão in the centre of Hue lies Gecko. We came here for lunch. The food was great but be advised that it takes quite a while to get your food. The service was friendly enough and the oysters were the highlight.

This bar is a must for anyone visiting Hue. He Army Pub is located in the centre of the city, on the street Phạm Ngũ Lão. The bar is made up of war remnants from the Vietnam – USA War. Here you’ll be able to sit on trunks once belonging to US soldiers and eat and drink off a glass table containing bullets, chains and other remnants. The drinks in this bar are super cheap. The entertainment is fantastic, the staff at the bar are super talented. Incredibly for 2 hours a night they take turns and perform quite songs that will blow you away.

The famous army bar in Hue is the DMZ bar. It, unfortunately, disappointed us. We expected it to be like HE Army Pub but to be honest, it lacked in every aspect. The service was poor, we arrived at around 4pm to have a few beers in the sun and we got the feeling that we were a hassle for the staff. The drink prices were standard for Hue but this place definitely lives on its past reputation. If you’re after an authentic and friendly army themed pub then head to HE army pub which is one minute away.

Things to do in Hue?

This walled city dates back to 1804 when Nguyen Anh took the throne when Hue was the capital in Vietnam. The Imperial City has been damaged in numerous wars that have scarred Vietnam. It is still one of the most important historical structures in the country and back in 1993. The Imperial City was awarded its status of a UNESCO World Heritage site.

Due to its history, this is a must-visit site whilst in Hue, compared to other attractions in Vietnam it was quite pricey (by Vietnamese standards). The city boasts a Citadel, places of worship, a music hall and many tranquil lakes and gardens.

An abandoned water park is probably not at the top of your list whilst on vacation, however, this one should be.

How To Get To The Abanonded Water Park – Hue

Just a short taxi ride (8km) from Hue Centre lies the Thuy Tien Lake Water Park. The water park is filled with slides, an amphitheater, aquarium and is centred around a large lake. A humongous 70 billion dong, or £2.5m was invested by the Hue Tourism Company to build the park in 2004. The highly anticipated project was never completed and the gates were locked, the project abandoned in 2006. Ever since the park has laid abandoned and dormant. Until recently, you could go to the main gates and bribe the security guard 300,000VND (£10) and he would look the other way. Due to the park recently being transferred to a private company, this is no longer possible.

We grabbed one of the Green taxis from Hue City Centre. The driver did not speak much English, but when we showed him the park on the map he knew where to go. We agreed on a price for 300,000 dongs, this equates to £10. For the price, the driver took us to and from the water park and waited whilst we hopped and skipped around the security guards.

Avoid the main gates when going here, security will not let you in. About 0.25km before you get to the main gate you will see a bend in the road where there are bikes and cars parked. Our taxi driver dropped us off here and told us to follow the trail into the park. This takes you in another way, by-passing the main gate. Follow the trail through the forest and you will come out at another ‘main’ trail, follow this trail downhill and you will eventually come to the lake and the towering dragon. The towering dragon offers great views across the park.

Be extra careful when exploring the park. The park has fallen into a serious state of disrepair and enter at your own risk.

Where to stay in Hue

We stayed in the four-star Rosaleen Boutique hotel, it was very affordable at £20 between us per night. On arrival at the hotel, the first impressions were fantastic. Check-in was quick and easy and we were allowed in the room early, a nice touch.

We booked this hotel due to the pool however the pool was quite small and there were only 6 sun-loungers around the pool, which were taken at most points. The water in the pool was also so cold to the point you could not jump in.

The rooms were spacious and clean but were nowhere near a four-star standard. Breakfast was included in the price but it was average.

The previously mentioned Vinpearl hotel would have been a better choice. For those of you who are not watching their pennies then you should go and treat yourself and stay at the Vinpearl. Once we set eyes on the fantastic Vinpearl we wished that we had booked there.

Hue was a nice surprise for us, a quiet place by day but it comes to life at night, it’s like a mini Benidorm. The nightlife here is great and the highlight for us was the Vinpearl rooftop bar and restaurant along with the HE Army Pub. We give Hue an 8/10, a must-visit on your trip to Vietnam. Do not skip it as most do.

Where we visited in Vietnam