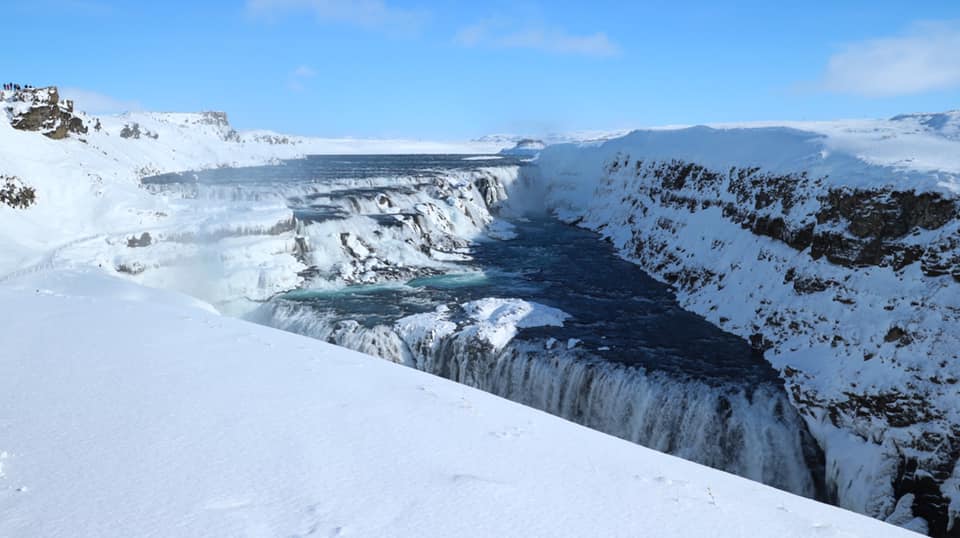 Driving the Golden Circle by yourself

We decided to do the Golden Circle on our own. There are plenty of tours in Reykjavik that provide The Golden Circle Tour but we felt it was expensive and we would be stuck to their timetables. Instead, we opted for car hire and to do everything ourselves. This worked out to be a lot cheaper and it gave us time to explore each site at our own leisurely pace. Ideally, you need two days to do the Golden Circle tour. As our time in Iceland was limited we managed to complete it in one long day.

We rented a little Toyota Aygo, in hindsight it wasn’t the best option considering the wintery weather, but to be fair, we only skidded a few times and I still blame it on Michael’s driving! The car was fitted with studs on the tyres so it was pretty safe most of the time. The roads were reasonably okay as well until we got further in to the Golden Circle where it did get a little snowy and windy! Also, I must add, we did try and do the majority within the one day! It was A LOT of driving but the sites break it up quite nicely. We have put our route in chronological order if you would like to follow.

Parking and entry is free at the majority of the Golden Circle sites.

Be wary, if you’re visiting in the winter months the roads can be very dangerous, check out the slideshow below.

*TIP* Take sunglasses! It was super sunny when we visited in March and with how snowy it was, they were definitely needed.

We stumbled across this beautiful lake purely by accident, the first point of call was meant to be Oxararfoss Waterfall but it was inaccessible due to heavy snow in the days leading up to our visit. On the main road to Oxararfoss, you will pass some stunning sights but this lake is a must-see. The drive from Reykjavik to the lake is 50 minutes.

From the lake our next stop was the Strokkur Geysir, in clear conditions, this is a 45 minute drive but as the conditions were bad it took us over an hour. We visited the Geysir Geothermal area which is located within the Haukadalur Valley. There are several geysirs in this area, the most active one in the area is called Strokkur and it spouts hot water as high as 30 metres every few minutes. We were lucky to catch this twice and it was amazing to see!

As we drove higher into the Golden Circle, the deeper and more treacherous the snow lay. A short hop and a skip away from Stokkur is the Gullfoss Waterfall, this was one of the highlights of the Golden Circle tour. When we visited, there had been recent snow fall and the snow was shovelled to make pathways due to it being so deep.

We can honestly say that the view was outstanding here and was well worth the visit. Although it was a little busy so you may need to time your photos right so you don’t get anyone in the background. It was fascinating watching the waterfalls and the flow of the water all the way to the bottom. Definitely worth a visit and I can’t recommend it enough. Although the snow made it difficult to get to the waterfall, the views with the encompassing snow made it special.

Gullfoss was full of tourists but Faxi was very much the opposite. It was eerily quiet here.

Faxi is just a short 20 minute drive from Gullfoss or 10 minutes from Stokkur. It was nice to have this place all to ourselves, you really do get lost in the beauty of this powerful but peaceful wonder.

This was the first and only thing on our Golden Circle Tour where we had to pay. The cost wasn’t much, at around £3. The Kerid Crater lake was formed by a volcano. When we visited it was iced over, it was worth seeing as it was on the tour but I would not go back out of our way to see it again. From Kerid Crater you have two choices.

We decided to head east and complete all of the sites in one day, the drive from Reykjavik to the waterfalls is 2 hours. The journey from from the Kerid Crater was 90 minutes. The roads to the waterfalls are much better than the rest of the roads in the Golden Circle, this ensures a nice, smooth drive. Do however be wary of speed cameras on this route.

First, Seljalandsfoss. This waterfall towers at 60m high, it is well signposted but you can also see it from the highway that you drive down to get to it. Parking is charged here so make sure you have Icelandic cash or card to pay, you can use contactless.

Skogafoss is just ten minutes from Seljalandsfoss, we found this waterfall to be much quieter but just as impressive. We visited both of these on the way to see the Sólheimasandur plane wreck. You could easily see the three sites over the course of a day.

It really is worth a visit, you can take the steps up and actually go under the waterfall.

We also visited the abandoned plane. It was quite hard to find, but when we did we parked up and starting making our way. It’s around a 2 mile walk from the car park to the plane. Find the car park location, here. The walk isn’t too bad, it’s quite flat but it just feels so long! With the added cold, it was a lot as you went from hot due to walking so much to freezing on your nose and finger tips. However, when we reached the plane, it was definitely worth it.

Be warned though, it is VERY TOURISTY. We got a surprise as it was busier than any of the other natural sites, you often had to wait your turn to get photos. It does specify on signs everywhere that you’re not supposed to climb on the plane. But guess what? we did. It was truly an experience (Disclaimer, we do not encourage anyone to climb on this structure, it is very dangerous). In the distance, you could also see the waves crashing on the beach. If we had some more light, we would have definitely ventured further down there.

Overall, if you have the time and the light, do it! It was on our list of HAVE TO DO things when we went and we were so happy that we managed to tick it off!!

Is the Golden Circle worth visiting?

Overall, The Golden Circle as a whole was just incredible. It’s definitely a bucket list places which we are super happy we can finally say we’ve done. The views were amazing and photos just don’t do it’s beauty any justice.

Read more about our Iceland trip with our reviews of Iceland’s capital city, Reykjavik and the main tourist attraction in Iceland, the Blue Lagoon.